Despite the many restrictions brought about by the global pandemic, Year 8 were able to come together in their year group ‘bubble’ on Tuesday this week for their end of term assembly. Head of Year 8, Miss Beaveridge, was delighted to have the opportunity for the students and staff to reflect upon and celebrate the numerous achievements. With their first year at Blue Coat cut short, back in March when school moved to online teaching, this cohort of boys were unable to participate in the many co-curricular activities which normally form such an important part of the Blue Coat curriculum. However, since school restarted in September, it seems our Year 8 boys have seized every opportunity afforded to them. They have taken part in House competitions, Music concerts, Drama performances and Sport while continuing with their academic studies.

Oliver Preston (Aldworth), Charlie Allnutt (Hall), Henry Johnson (Malthus) and Kaiden Lynch (Rich) started the proceedings with their House reports. As ever, the House sports competitions have been been fiercely contested and have included touch rugby, cross-country, basketball and ultimate Frisbee and at this stage in the year there does not seem to be a clear front-runner for the Sports Cup, so still all to play for next term and into the summer. What was evident from these reports though was the strength of team spirit and camaraderie within each House even when they finished fourth in a particular event.

Earlier in the term, Senior Housemaster, Mr Lambert launched the House Lip Synch video competition. The idea was for tutor groups to make an amusing video to the Carly Rae Jepsen song. “Call Me Baby” and although this was not a compulsory event, in true Blue Coat spirit, the Year 8s threw themselves into this challenge; quite literally in many cases! The video produced by Miss Plowman’s Tutor Group has been a particular favourite for Miss Beaveridge who confessed to watching it several times over when she was in need of a lift. Having shared the video in assembly it was clear to see why. Congratulations to David Jacobs for directing this most amusing and uplifting video.

In Drama this term, Year 8 students have been exploring the genre of Commedia Dell’Arte, an exciting form of improvised comedy that came from the streets of 15th century Italy.
Alongside performance assessments, students were tasked with making a mask that reflects the personality of the stock character they were portraying. From the long nose and the furrowed brow of Pantalone to the cat-like nose of Arlecchino, students have experimented with card, clay and plaster to create three-dimensional masks to be used in their performances in order to demonstrate their understanding of this genre of theatre. Thank you to Drama Teacher, Mr Stone, who captured this wonderful image of some of the boys wearing their masks. 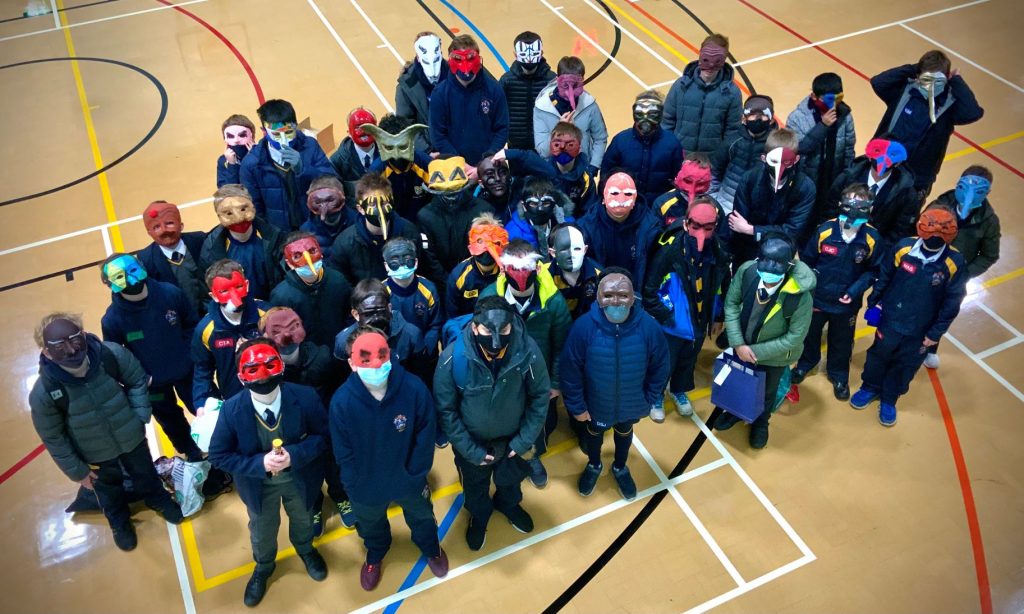 Our Year 8 musicians have also been busy this term participating in a number of Music concerts throughout the term. Multi-talented Alan Parra-Manzo delighted us with his violin playing during the assembly and most impressively, played his entire piece from memory. Well done, Alan. Miss Beaveridge was delighted to present Music colours to Alan as well as to Finlay Griffiths and Joel Wilson.

As the assembly drew to a close, Miss Beaveridge said to the boys “I am immensely proud of you all and your achievements. We all have had a number of additional challenges to deal with this term and you have impressed me with the way you have conducted yourselves around School, thank you. Yubbie and I wish you all a very Merry Christmas”.