On the morning of Tuesday 15 December, Year 7 pupils filled the Sports Hall (while observing social distance) to celebrate all that they have achieved during their first term at Blue Coat. 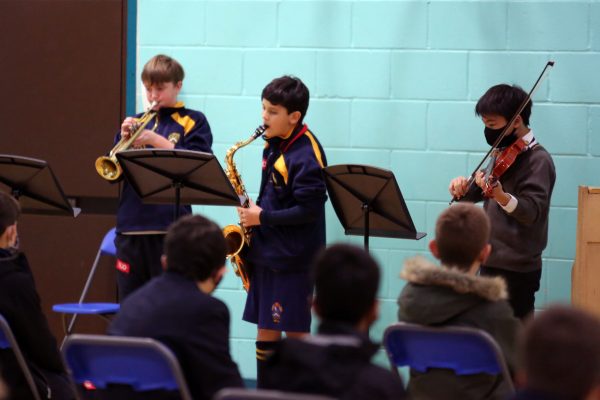 Mrs Rebecca Crossland, Head of Year 7, began proceedings by inviting our youngest Music Scholars Zen A, Richard D, Jai C and Will L to the front, where they brilliantly performed Rudolph the Red Nose Reindeer on a combination of piano, violin, saxophone and trumpet. After their fabulous performance, Mrs Crossland awarded Junior Music Colours to Will L, Jai C, Isty C and Ayden T for their dedication to the musical life of the School in their first few months.

The Headmaster then awarded commendations for collecting Plus Points. A full list of all the boys who have received commendations this term is at the bottom of this page.

Next, we heard from George W and Sam B-R, who spoke about the upcoming musical event in February. They spoke about the two performances that Year 7 would be putting on, When I Grow Up from Matilda and Food Glorious Food from Charles Dickens’ Oliver:

‘The production is called The Show Must Go On and will have musical numbers from West End shows that are not currently being shown in London. This variety show will allow us to do the hard work that the professional actors, actresses and musicians are not able to do.’ 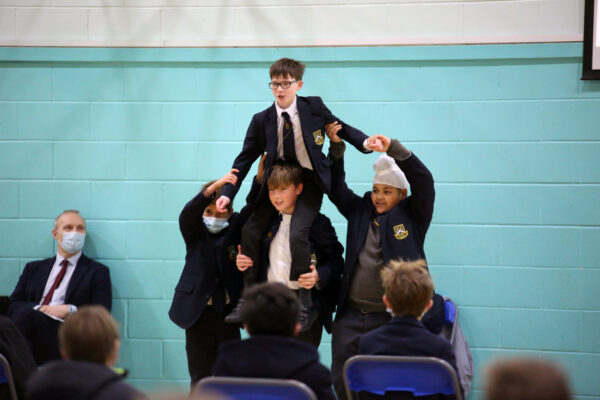 Mrs Crossland then invited Zac N, Luke N, Will O and Anmol M to perform a dramatic display of what they have been learning in Mr Stone’s Drama lessons. A combination of poetry and physical performance, the four boys certainly entertained their year group!

Next up were the House reports, where pupils spoke about the accomplishments of their respective Houses. Tejas J spoke about the achievements of Aldworth, who came second in House Rugby (A), Swimming and Basketball. Finn B and Lucas, of Hall, had much to celebrate, as Hall house came first in House Rugby (A), Cross Country, Swimming and the House Poster competition! Ryan O and Archie S were next to speak, and Malthus House have also done well this term, winning House Frisbee and House Rugby (B). Aryan S spoke for Rich, and celebrated wins in House Frisbee (B) and House Basketball.

Finally, a video of the best Rosebowl entries of 2020 was shown. The Rosebowl is an opportunity for new Year 7 pupils to share their interests with the School community. This is normally done in person in the Sports Hall, where a plethora of pupils’ hobbies and interests can be found. This year was slightly different, owing to you-know-what, so instead, pupils’ displayed their interests in video!

Jack W’s extreme mountaineering came in fourth place, while Eliot H’s combination of reading, running, skiing and cycling won him third place. Young chef Tom B, whose recipe for Yakisoba, a Japanese stir-fry, snatched the second place spot. The winner of this year’s Rosebowl was William L, who enjoys making cordial from foraged fruit! He explained that he likes to use seasonal fruits, and in the summer made a blackberry and apple cordial!

Finally, Senior Housemaster Mr Lambert spoke to the year group and reiterated some advice that he had heard from a pupil. He encouraged the pupils to ‘practice who you want to be’ while here at Blue Coat, and by the end, you will be several steps closer to that person.