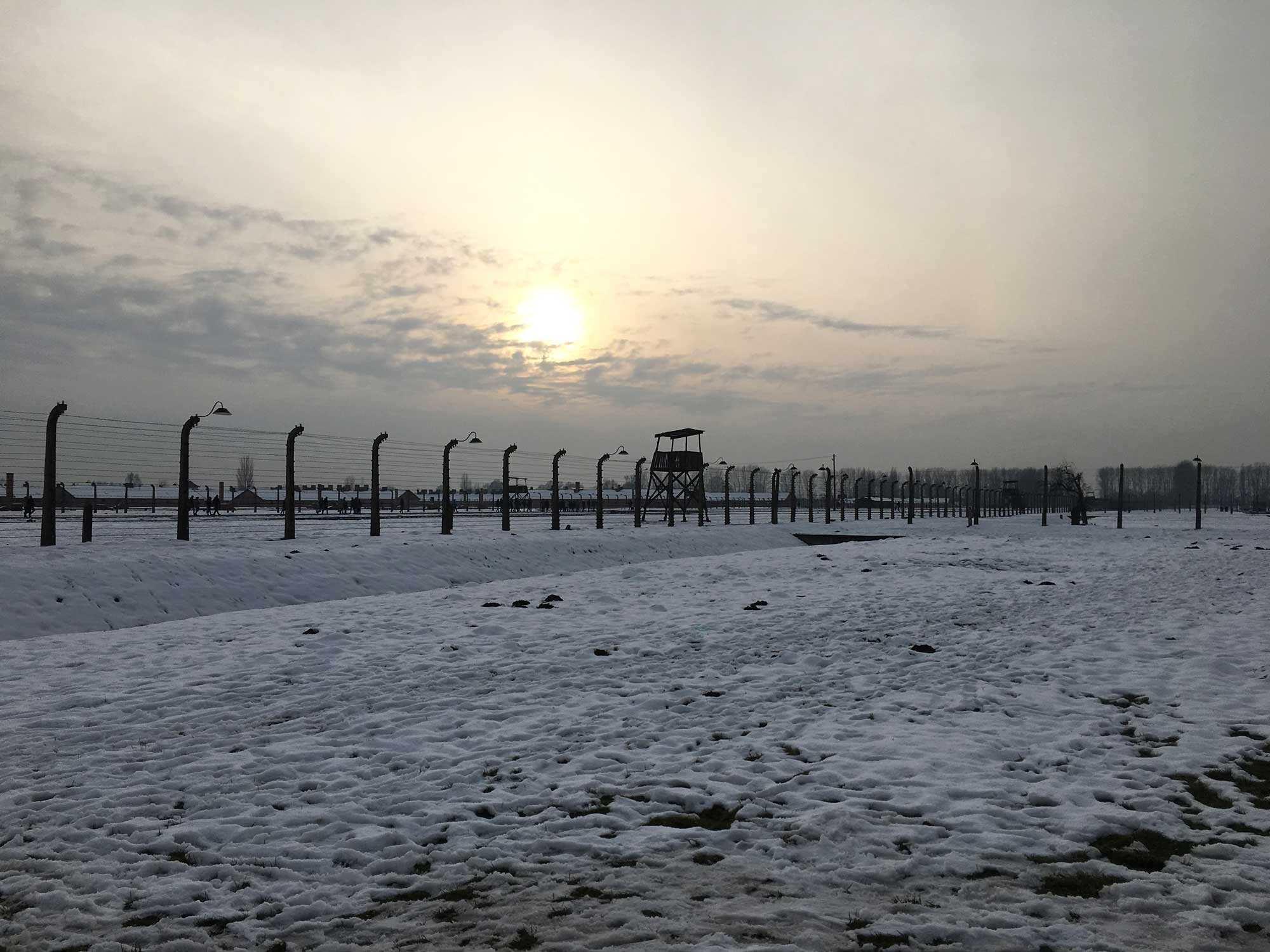 A group of  students and staff embarked on a Psychology-based educational visit to Krakow, Poland, over half-term – a third time for the Psychology department. Krakow and Auschwitz-Birkenau Concentration Camp are chosen as a destination to enable the students to understand how social and cultural influences such as conformity, obedience and group prejudice were major factors in the attempted genocide of Jews, Gypsies, homosexuals, the mentally and physically disabled, and political dissenters of the Nazi regime.  During the trip, students used their knowledge of Social Psychology to reflect on how the Nazis created an in-group vs. out-group societal structure that made it easier for the majority of people at the time to conform to the social norms by internalizing Nazi propaganda.  Students also used their understanding of how dehumanizing individuals made it possible to put people into ghettos, concentration work camps and then the death camps like Auschwitz-Birkenau. 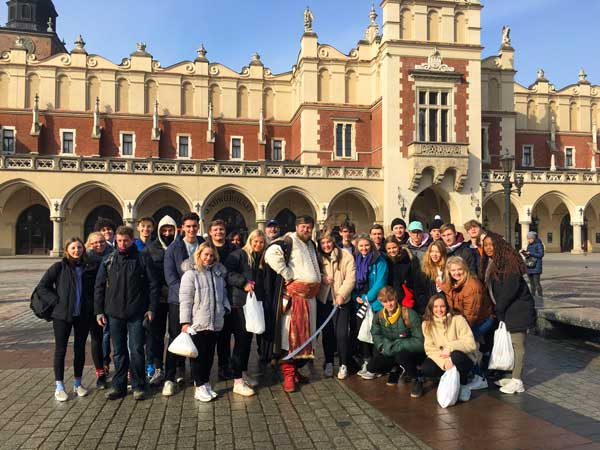 Glowny, the largest market square in Europe. Later on, a guide walked them up to Wawel Castle (from which Polish kings ruled for centuries) to see it lit up at night- a magnificent sight.

On Friday, the students were taken on a tour of the old Jewish quarter in Kazimierz, where Krakow’s Jewish residents lived from the 13th century. For centuries, the Jews traded and lived side-by-side with the other residents of Krakow – until the Nazi Occupation. The tour included a Jewish cemetery, which contains a memorial to those individuals whose headstones were broken up during the Nazi Occupation, to be used as paving stones or building materials.  In the afternoon, the group crossed the Vistula River to visit the Jewish Ghetto in Podgorze, where 15,000 Jewish people lived in a space that was originally inhabited by 3,000.  The Ghetto was surrounded by walls that were made to look like Jewish headstones.  It was liquidated in 1942, after which most occupants that survived disease or were fit enough to work were sent to camps like Auschwitz.  After the tour, we group visited Schindler’s Factory Museum where they learned about how Oskar Schindler helped save more than 1,200 Jewish people (from his famous list). 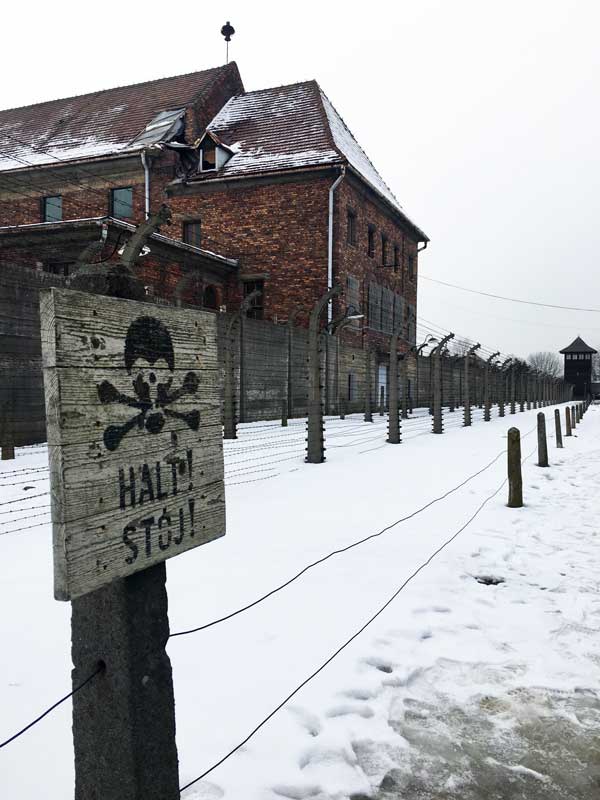 On Saturday, the students were given an expert guided tour around both Auschwitz I and Auschwitz II-Birkenau, where they learned that 1.2 million people were exterminated in the five years that the camp was open and, if chosen to work rather than be sent to the four gas chambers located in Auschwitz II-Birkenau, they survived for an average time of two months, because of the harsh conditions.  There was stunned silence as the students were led through the exhibits, where they saw how hair was used for cloth and saw the items from an area in the camp called Kanada.  These items were confiscated by the Nazis, gathered from the suitcases of the camp deportees and sent back to Germany to be used or sold.

Sunday’s excursion was to the Wieliczka Salt Mine, one of the oldest salt mines 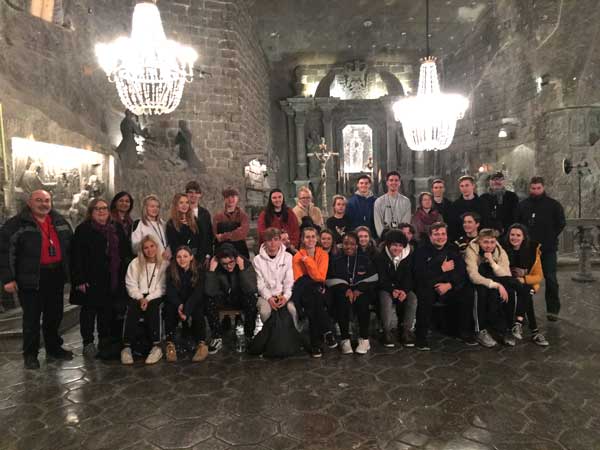 in Europe, reaching 327 meters in depth and more than 178 miles in length.  The students learned how important salt (white gold) was to the Polish economy.   It was first opened in the 13th century as a gift to the Queen of Poland, and continued operations until 2007.

Once again, this was an eventful trip for staff and students and one that will continued to be offered to the students.  We should never forgot what happened during the Holocaust and how easily people can be led to scapegoat or demonize minority groups.

Author JS Landor inspires our students 1st XI cricket tour to UAE
Book an open event Apply online Keep exploring
We use cookies to ensure that we give you the best experience on our website. Click on the 'X' to accept our use of cookies, or 'Learn more' for more information. Learn more