Expectations are always high for the Grand Concert. I mean, with a name like the ‘Grand’ Concert, you would expect something quite spectacular, right?

Well, if you were in attendance on Wednesday (10 November) evening, you’ll certainly agree that this event was just as grand as described! The RBC Orchestra delivered an incredible opening number; the theme to Pirates of the Caribbean, which was performed by a whopping 38 members of the Blue Coat community! This certainly set the tone for the rest of the evening and for me, this was actually the best live musical performance I’ve seen or heard at Blue Coat, which is really saying something!

Year 9 compère Harry introduced Year 13 Bentley, who played the piano and sang Pink Floyd’s Time. Despite technical difficulties, he carried on like a true showman and overcame the fact that his microphone slipped out of its holder. After he took a bow and walked off-stage, young Harry welcomed Year 13 Guy to the stage, where he played Malcolm Arnold’s Fantasy. This was very impressive, as he held some exceptionally long, crisp and sharp notes. It was also a delight to watch his face, as his passion and love for his instrument were more than apparent from his expression.

The Miranda-Zezula Trio were up next with Joseph Cosma’s Autumn Leaves and gave way to the Woodwind Quintet, who delivered a very playful version of Haydn’s Minuet and Trio. The Year 13 Band rocked out to Californication by The Red Hot Chilli Peppers, and certainly had heads bopping in the audience.

Once our senior rockers took their seats, the Treble Choir came to the fore, conducted by Mrs Watmough-Starkie. The youngest members of our community sang Humperdinck’s Prayer, which was very moving. Even more so was their rendition of In Flanders’ Fields, which was led by Year 8 Daniel. He was soon joined by the rest of the Treble Choir, in a performance that brought grown men to tears (this one at least…!). Given that the concert took place the day before Remembrance Day, I couldn’t help thinking of those boys and young men that were sent to war more than 100 years ago.

Fortunately, young Alan’s rendition of The Pink Panther lifted the spirits of the audience members, as he played the saxophone in a whimsical and fun recital. With smiles firmly back on everyone’s faces, the 14-strong Male Voice Choir took to the stage, fronted by Bentley, for their version of The Hollies’ He Ain’t Heavy, He’s My Brother. This was another moving song, backed by an image of a soldier carrying his fallen brother. I had never thought of this song in this way, I had always imagined carrying my own brother, who is definitely heavier than I am!

Year 7 Max came next and sang Electricity by Elton John. Max has actually been cast as the lead in the upcoming whole school musical production, and based on his form at the Grand Concert, Billy Elliot is looking very promising! He sang with true heart and used his body language to punctuate his chosen song. He gave way to Sanay, who impressively drummed along to Maneskin’s Beggin’, which had toes tapping and fingers clicking away.

The Chamber Orchestra, directed again by Mrs Watmough-Starkie, came to the stage next, and after spending a few minutes setting up, were ready to go with Boyce’s Symphony, First Movement. This was quite something, but even so, paled in comparison to their rendition of Piazzola’s Libertango. I had heard the Chamber Orchestra rehearsing this at the Open Morning in October, but barely a month later, the development they had made as a group was clear to hear.

After a short interval, the audience was welcomed back by the RBC Big Band, who opened with the theme to The Incredibles, which was, ironically, quite incredible. The 15-strong band also performed The Days of Wine and Roses, which was another triumph!

The Community Choir came after the Big Band, and the Reading Blue Notes certainly delivered. Their set comprised of Kurt Weil’s September Song, Cyndi Lauper’s Time After Time and Luigi Denza’s Funniculi, Funnicula, which was astonishing, particularly as they sang in the original Italian!

Soon after came the turn of the very well-coordinated String Quartet, who gave their rendition of Dvorák’s American Quartet before welcoming The Bash Cats to the stage for their deliveries of Louie, Louie by The Kingsmen and Quincy Jones’ Soul Bossa Nova. The latter of the songs was enough to make Austin Powers himself proud!

Year 8 Daniel impressed on the piano, as he played and sang Canyon City’s Flicker. He is a very emotive singer and has clearly taken inspiration from stage and screen – which may very well be where his talents take him later in life! After taking a bow and his seat, the Year 11 Barbershop Group, featuring Bentley, performed a true classic, Goodbye My Coney Island Baby, which they sang in an authentic and entertaining style.

Returning to the stage after a couple of years away, Year 11 Alex played Tárrega’s Capricho Árabe on the guitar. A talented classical guitarist, Alex maintained a clean sound and good poise and focus throughout. Afterwards, something much less clean; The Year 10 Band performing Queen’s Tie Your Mother Down. As has come to be expected at a Blue Coat concert, Year 10 frontman Anoop delivered a healthy dose of showmanship in a very Freddie Mercury-esque recital of the song.

Penultimately, Year 12 Millie, who has also been cast in the upcoming whole school musical, gave a spectacular rendition of Popular from the musical Wicked. I’m not sure if her voice came straight from the West End, or if it’s heading straight to the West End, but either way, she knows her way around a show tune!

Finally came the turn of the Intermediate Jazz Band, and the name does them little credit. Their performances of Pharrell Williams’ Happy and Cab Calloway’s Minnie the Moocher were just marvellous. Year 8 Isty sang his heart out, while the Jazz Band’s accompaniment complimented the vocals perfectly.

Overall, it was a truly fabulous event, with Director of Music Mr Richard Meehan saying, “It was really good to return to live performances stronger than we left them before the pandemic. This was a very purposeful event, with larger jazz bands, a good variety of old and new, classical and modern, while also raising over £350 for Brass for Africa. Thank you to everyone who attended the concert and donated.” 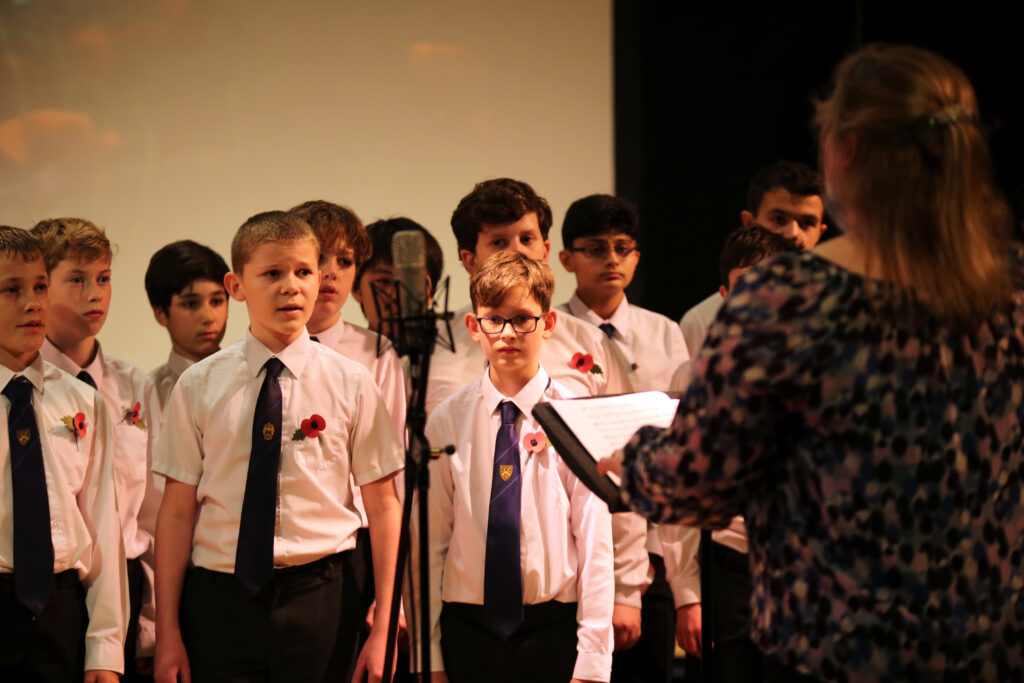 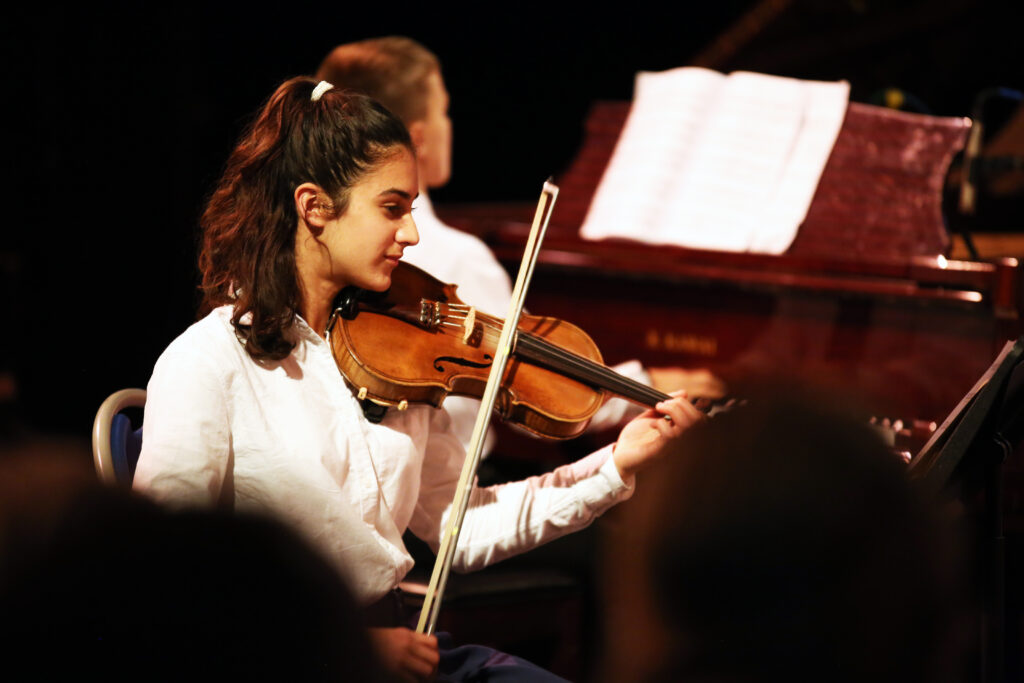 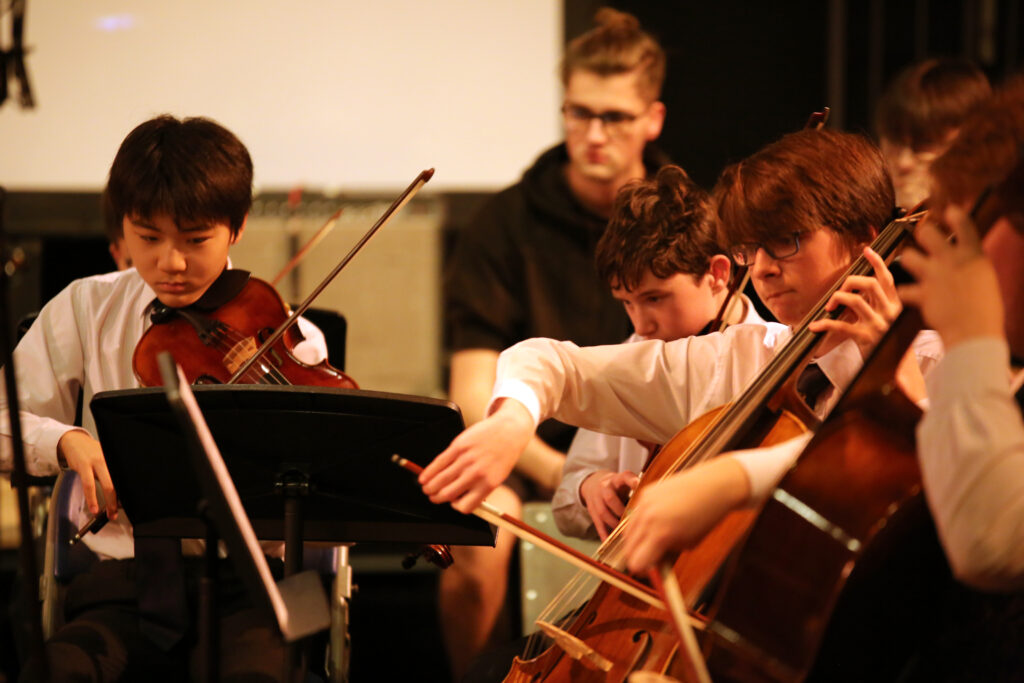 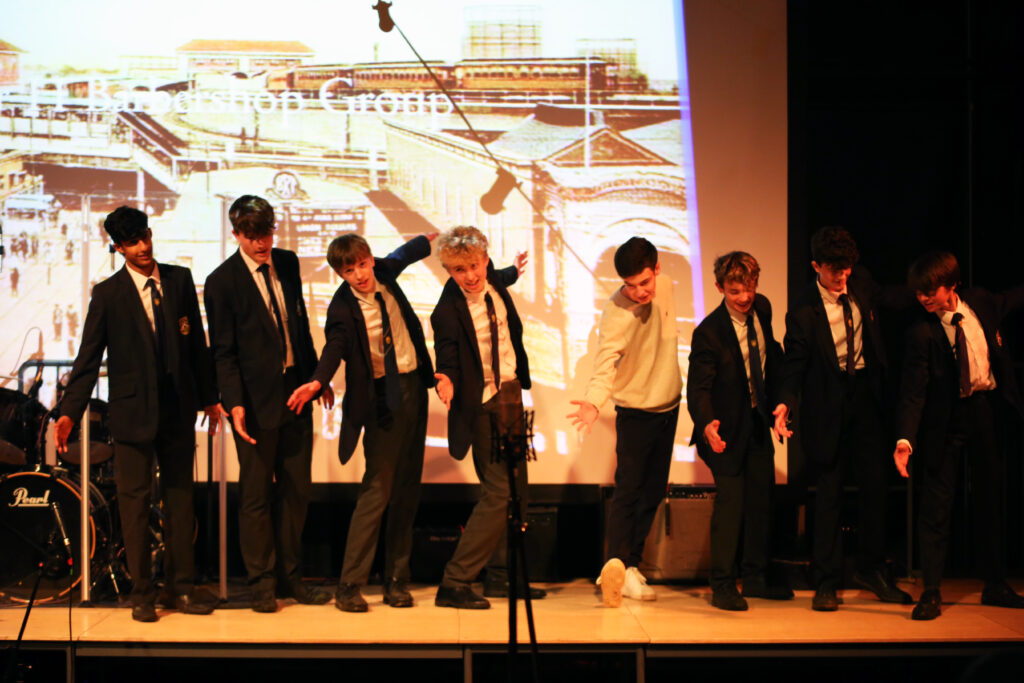 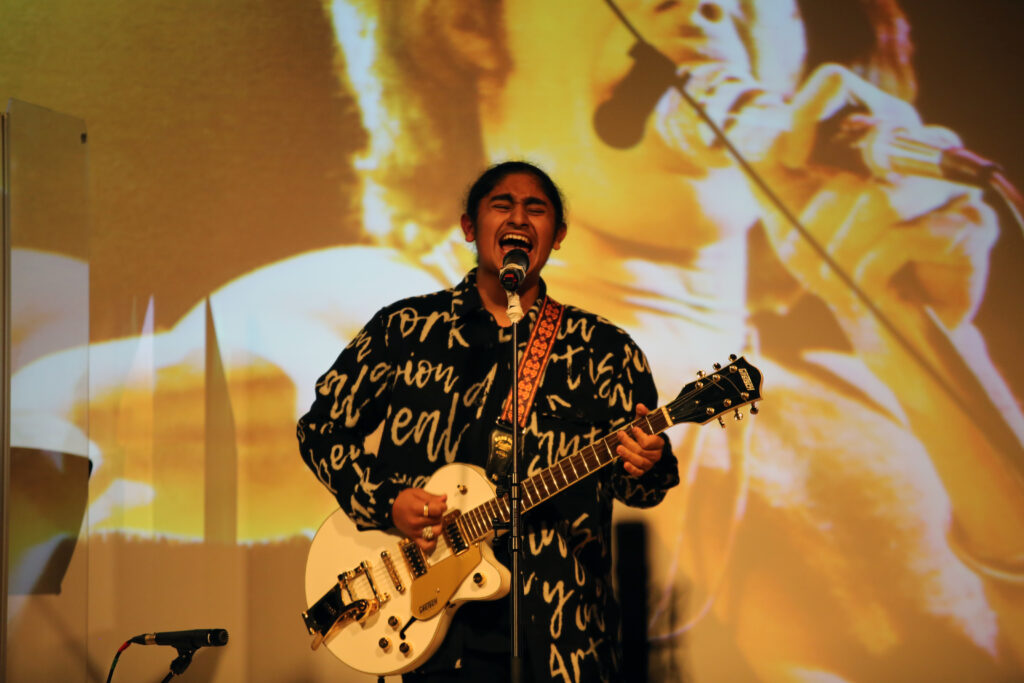 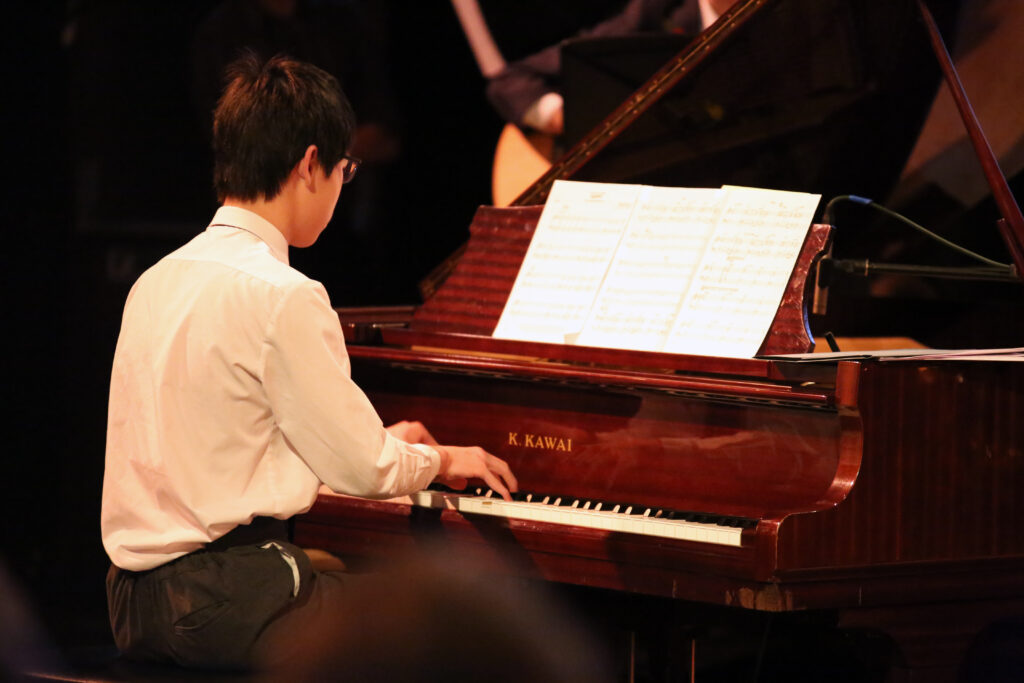 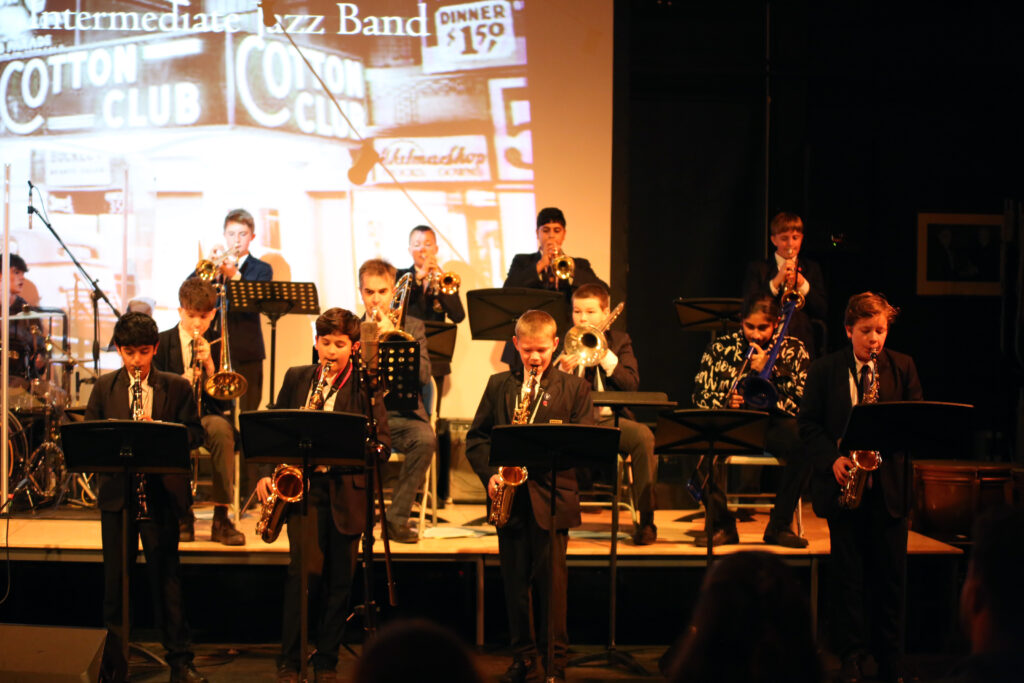 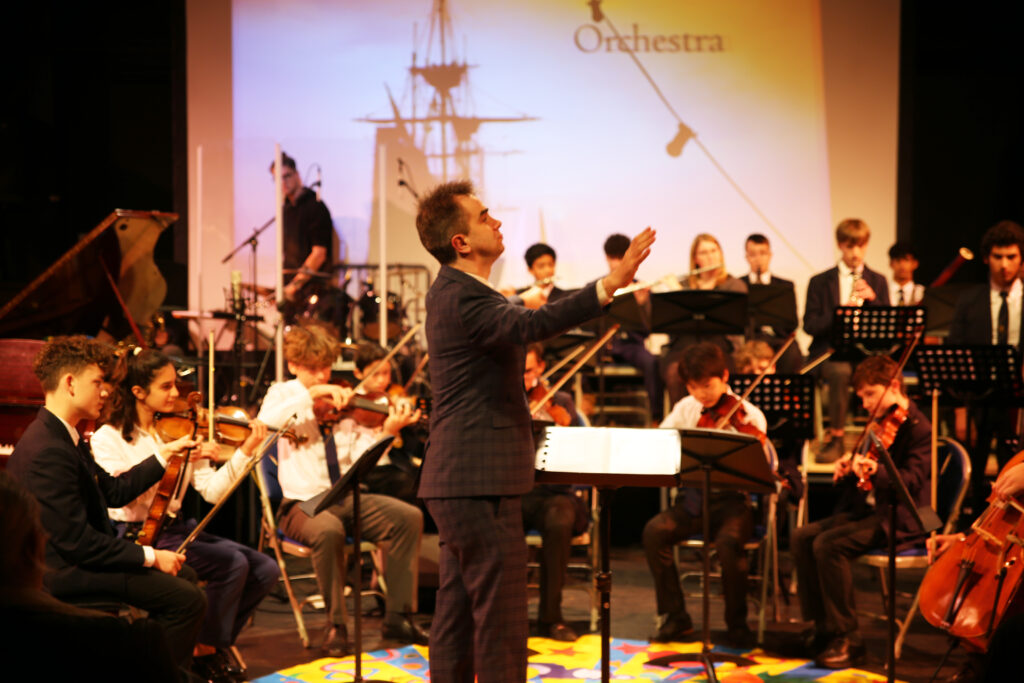 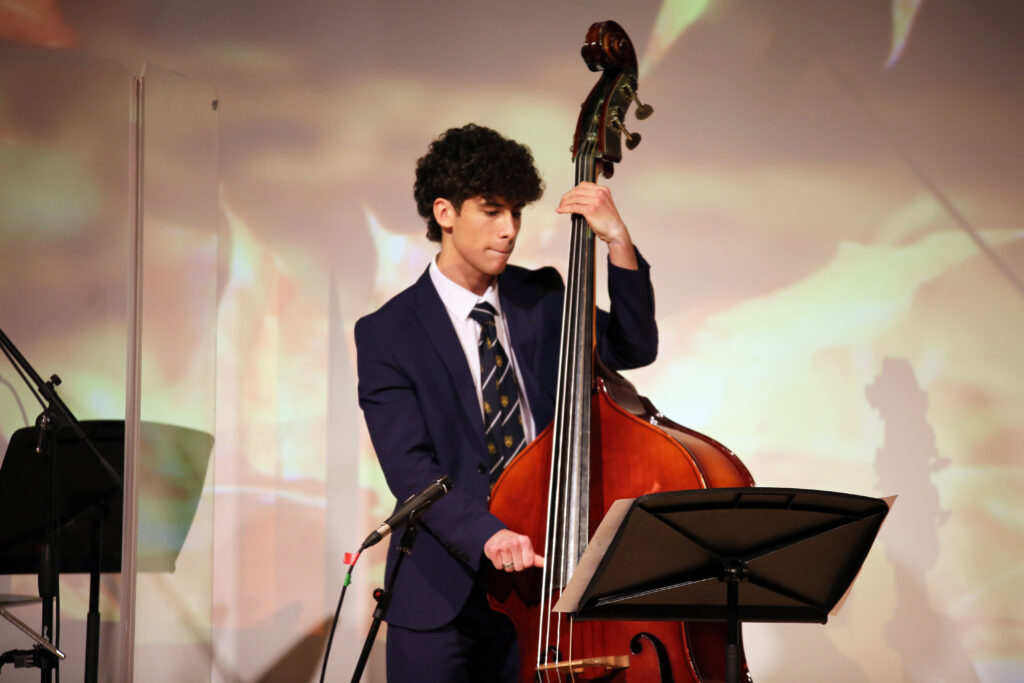 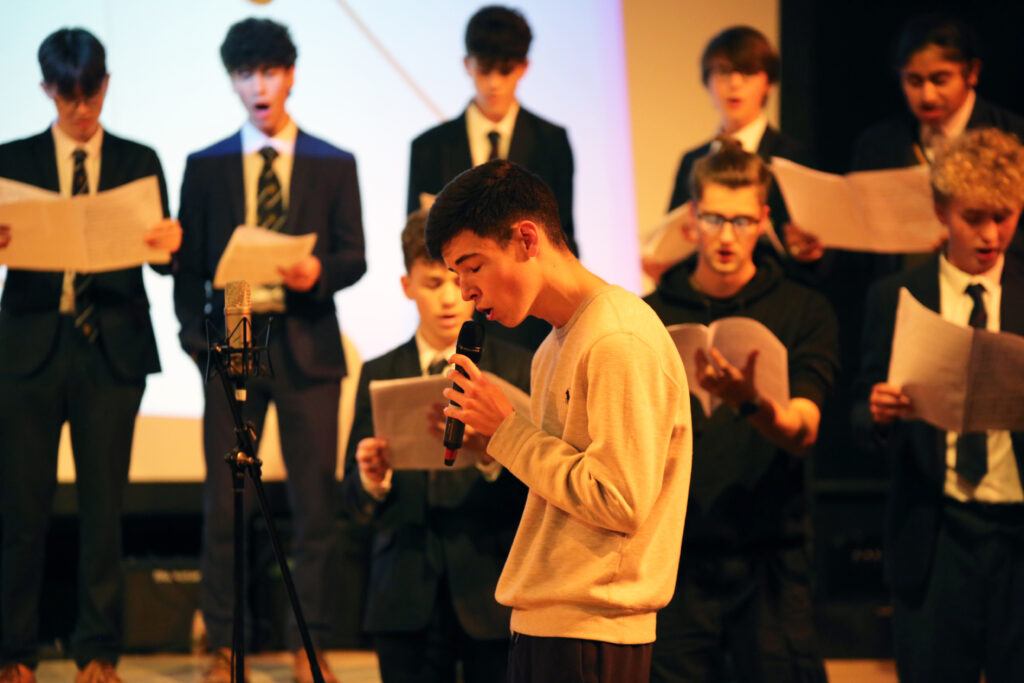 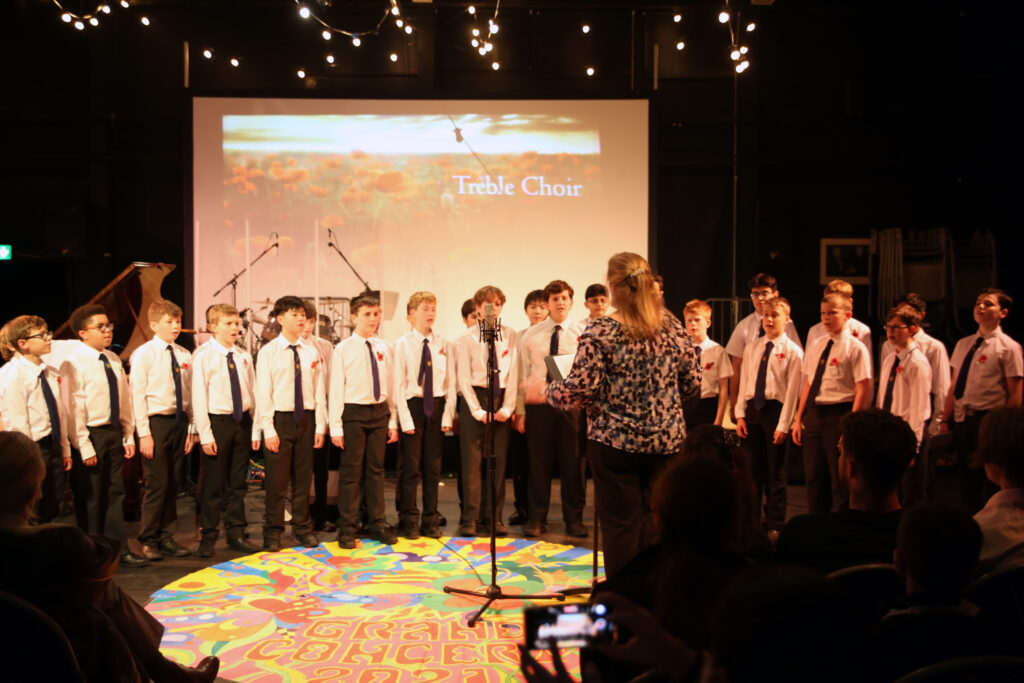 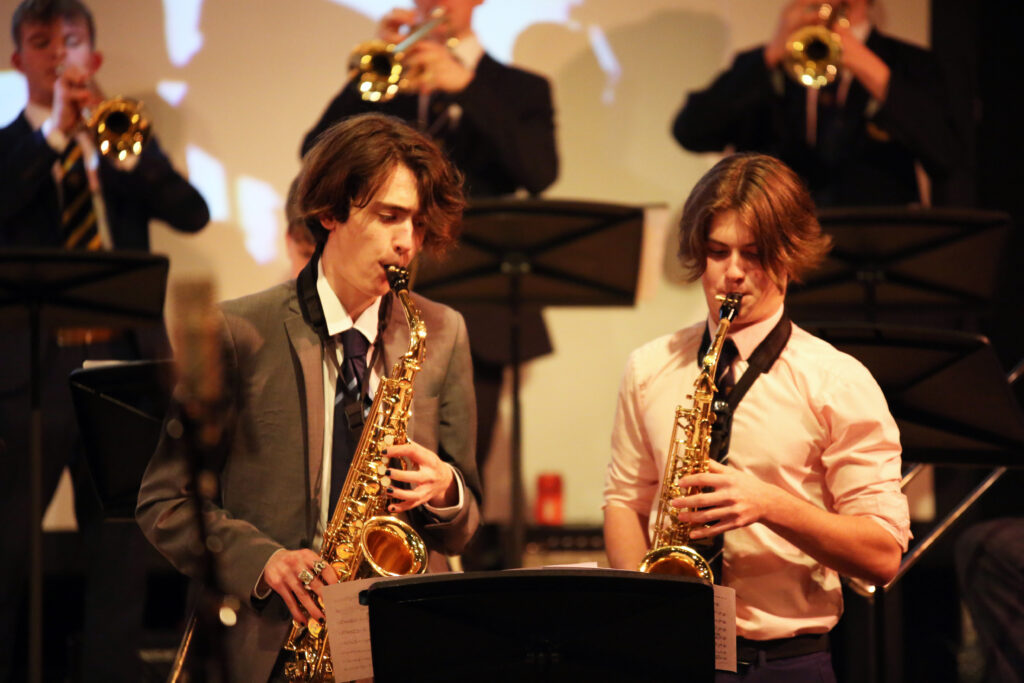 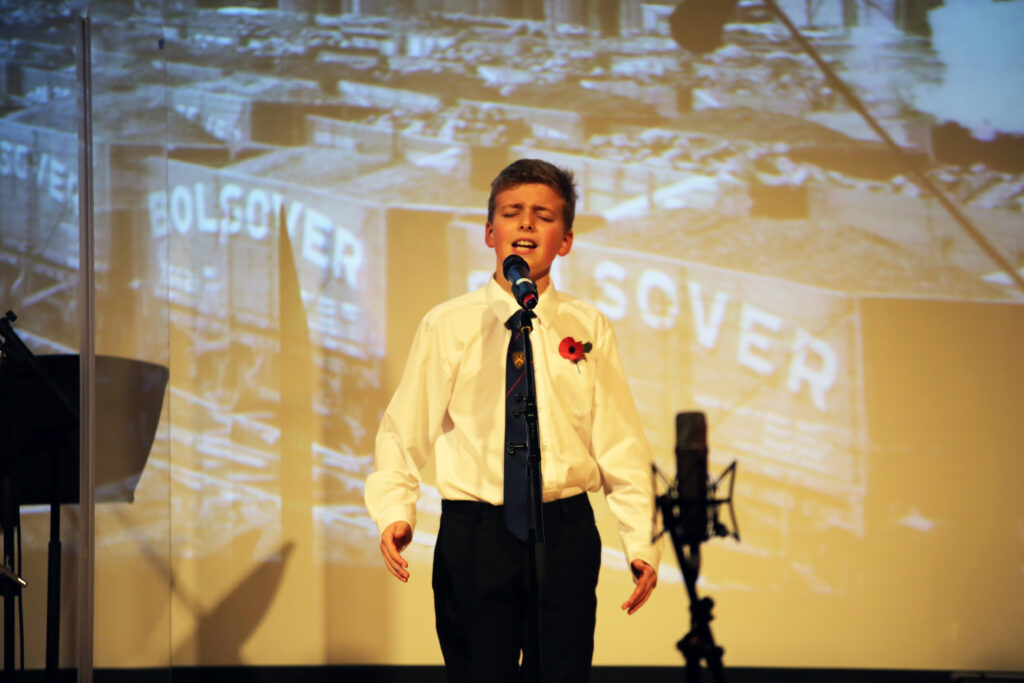 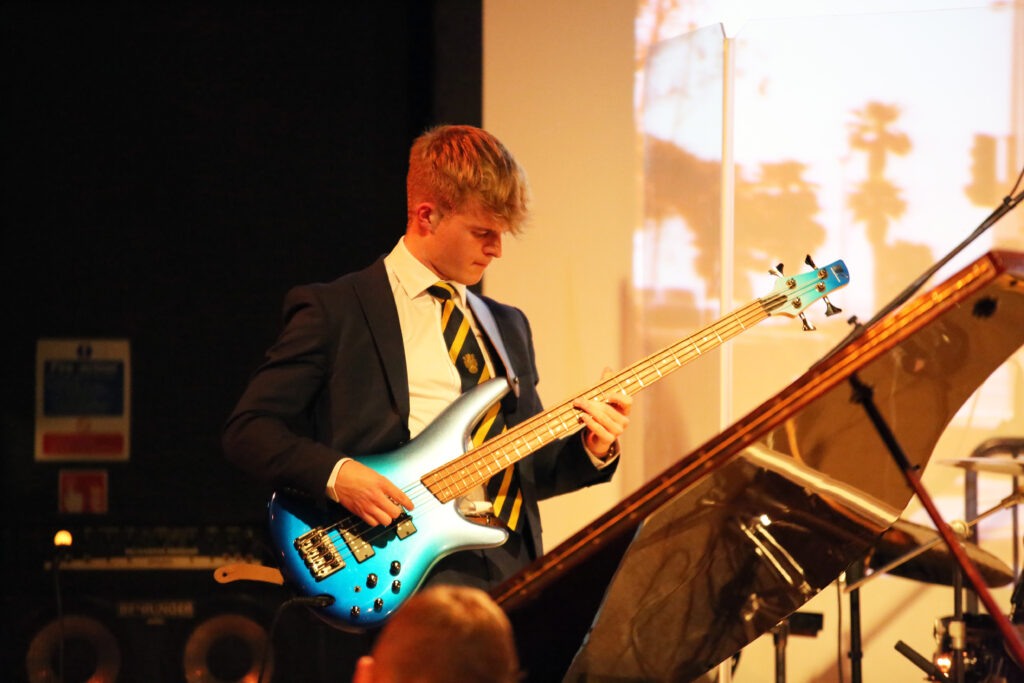 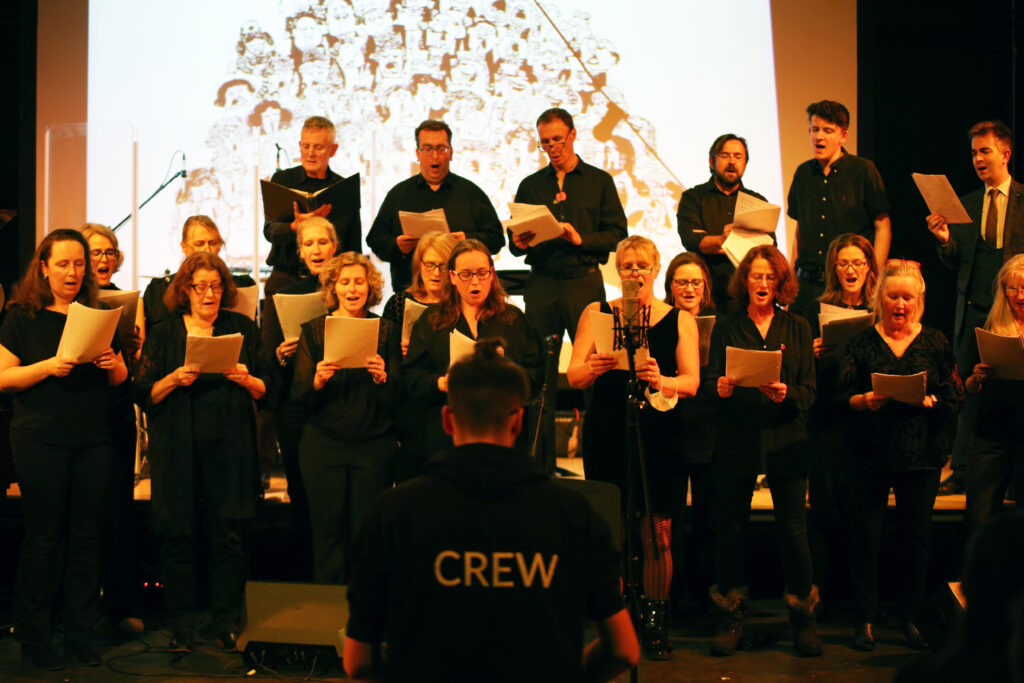 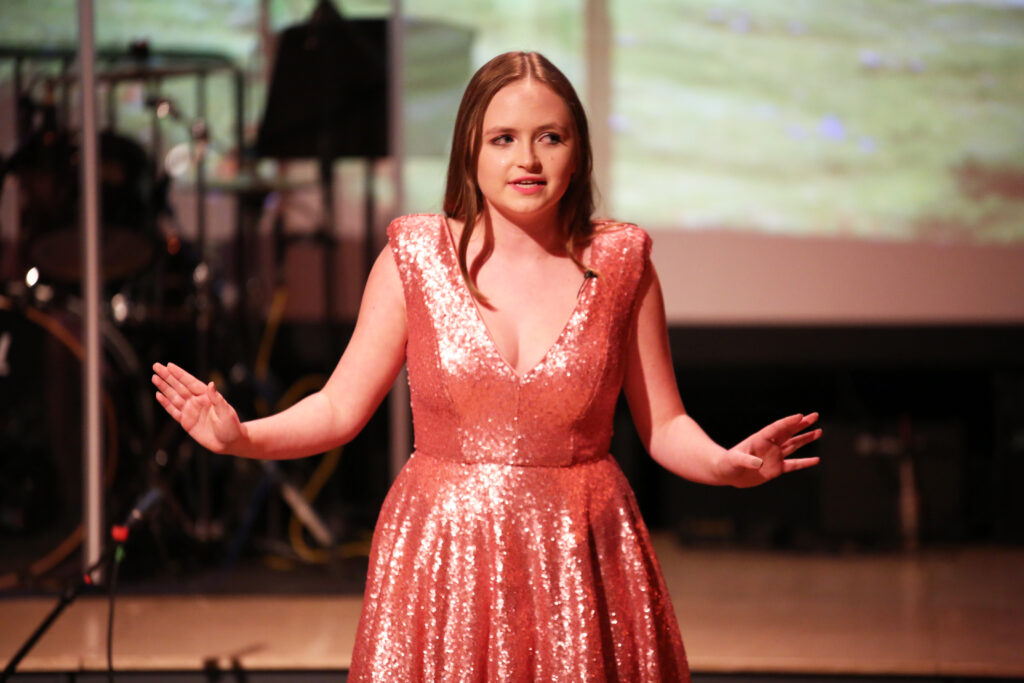